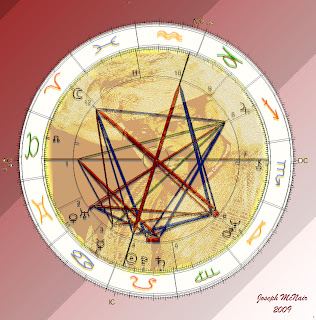 the ruler of ...
for marc edmund jones & his sabian symbols

the ruler of the nation...

the tortoise made hermes exclaim “u are a joy to me,”
steal its pretty tortoise shell & turn it into a lyre.
the four-eyed goat made eşu declare “u will not see
what i do!” he made ebo & exposed the goat a liar.

the heathen vainly cuts a forest tree, adorns it
with silver & gold, & fastens it with nails to appease the
gods! eşu scoffs at the christian who knows not that to
live free of privation, one must please the gods.

a finger pointing to a line in an open book…

fingerpointing is prerequisite to reading words when
vision is weak or distracted; one cannot scan a line
of text without losing his place. eşu needs not fingerpoint
to impute blame or make one lose his place or face.

through bankruptcy, society gives to an overburdened
individual the opportunity to begin again...

tis not society, but eşu, who finds the line delineating this
& that; blurs it. finds the divinely pure & clean; sullies it.
finds the lowly & abandoned; lifts them up; rewards &
confounds the foolish & the good.

a hen scratching the ground to find nourishment for
her progeny...

the scratching of hens not only finds seeds & the
occasional worm to feed their young, but cleans off the
magics laid down on the ground by enemies. those who
befriend eşu are seldom troubled (or for long) by enemies.

the old man longs for the jungle, to humble himself again
in the arms of the wild. he looks upon his trophies as
emblems of a deep, terrifying vision of love. eşu reveals
unfathomable levels of soul knowing.

every incarnate soul should be grateful for the gift
given it, thankful that eşu has opened the way for it to
come again; thankful to ọlọrun who has given it a new
body, breath & destiny!

this rider has iwá-pẹlẹ, has balance & coordination & can
ride the steeds of change without equipment to compensate
for errors, has made ebo to eşu; has developed good character.
all good things come to those with good character.

a powerful statesman overcomes a state of political hysteria...

he fed his ifá a ram & a he-goat as his awos, the sons of
wind, thicket, trees & ropes, advised. he knew that he
would prevail in any crisis so long as he fed his ifa & eşu,
& listened to the advice of his awos.

“learn u the efficacy of patience for such is as constant
as heaven & earth. patience requires forbearance & resistance
to the temptation of vengeance. leave vengeance to the
divinities who will intervene on the side of righteousness!

having passed through narrow rapids, a canoe reaches
calm waters...

what human suffering may come is but the dark before
dawn. forbear & be patient, child of earth, temptations reveal
yr weaknesses, but to resist them makes u strong. eşu tests
& tempers yr mettle.

a dentist at work...

eşu works the permanent parts of our lives, the bony sub-
stances & soft inner pulp -- parts under threat like decaying
relationships -- filling holes, straightening or repairing that
which is broken or taking them out.

a path through woods rich in autumn coloring...

from too old to work & too young to die to reaping
entitlements given a life lived well & the stories,traditions
& knowledge borne & told, eşu, the crotchety old time
tester, rewards those who make sacrifices.

pelicans menaced by the behavior & refuse of men
seek safer areas for bringing up their young...

my errant thoughts have abandon their nests, leaving their
eggs to be trampled or exposed to predators. where will
they find new nesting grounds & solemn sancturary?
iba eşu, please open that road.

"arise... approach the great beings & know the truth!"
eşu demands we know the truth within existence, the
reality beneath appearance & the immortal which gives
meaning to our mortality. In this way shall we be healed!