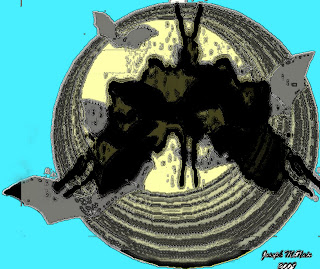 bat
the sun was set; the night came on apace,
and falling dews bewet around the place;
the bat takes airy rounds on leathern wings...
john gay
a freakish guardian of the night, frenzy feeding
on small flying vanities & inanities,
catching them on the wing after hearing echoes
bouncing off significant surfaces & others;
crunching carapace & exoskeleton alike
to get at the sweetmeats – the meaning in a world
where the articulation of lust is blindsided
by official mood swings that unbalance consciousness.
u are strong, able to regenerate, replenish
yr life force; able to discern yr bounty, alter
eccentric movement in spite of yr proclivity
to get scrambled, confused & fly blithely into things
like a devil bird caught up in happenstance's float.