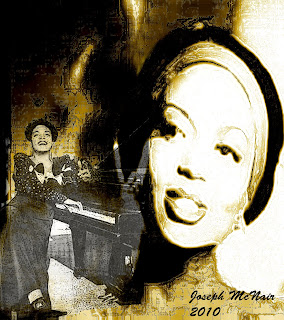 for hazel scott
1920 -- 1981
i'm a woman
phenomenally.
phenomenal woman,
that's me.
maya angelou
sitting bronze, bare-shouldered & beautiful
at the piano, café society, new york’s first
integrated nightclub, held its collective 1939
breath as nineteen yr old hazel scott confidently
sashayed like a stunningly attractive woman
accustomed to admiring eyes thru the
pronounced lyricism, expressive breadth &
structural ingenuity of the opening movements
of rachmaninoff’s valse in d flat major to suddenly
translate along an aural axis away from the
plane of familiar focus thru a looking glass of an
african gumption; into the tonic/chordal striations
of stride, the seductive left hand decadence of
boogie & the emotional modulations of the blues.
[she would later break national sales records for
decca with her “bach to boogie”repertoire.]
her music was the space wherein she kept the
source of her power hidden in plain sight. a
cyclonic force to reckoned with, neither racism,
husband adam clayton powell nor the vicious
slanders of the petty little men of the house
un-american activities committee could stop her
from cresting, from drawing attention to her
unabashed genius for fifty odd years. when one
door closed,she kicked another wide open &
crossed its threshold like a trinidad carnival
street parade. Not even death, the midnight
robber, nor jab molassie could stop her --
was just another threshold to cross; were just
two more in a long line of characters to get by.
©Joseph McNair;2010

Posted by Joseph McNair at 3:10 AM