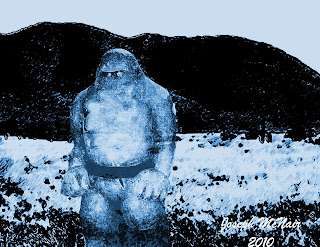 arizona goddam!
alabama's gotten me so upset
tennessee made me lose my rest
& everybody knows about
mississippi goddam…
nina simone

dos cabesas, yr steep mountain slopes & granite
outcroppings, yr vegetated canyon floors provoke
strong feelings of arousal, attraction, & yes,
even love by more than just the white-tailed &
mule deer or eagles, golden & bald, the ranging
mountain lion, the beautiful collared lizard &
the peregrine falcon. u, dos cabesas, are,
indeed,a love object for arizona natives
imprinted by the wilderness with its uncultivated
spaces,its searing heat with that eerie desert
dust on its winds, a narcotic that makes them
susceptible to quaint hallucinations (daylight
savings time is a bolshevik plot),conservative
& highly distrusting of government. (goddam!)
where lawmen under the influence of frontier
fancy could take a hapless but convenient
outlaw straight from the lyrics of their state
song, a befuddled recidivist burglar named
ernesto arturo miranda, compel from him a
rape, etc., confession, make him write it down
& sign papers with a printed certification that
he “voluntarily & of my own free will, with no
threats, coercion or promises of immunity…” &
“full knowledge of … his)…legal rights” made
that confession, but failed to inform him of
his right to have an attorney present & of his
right to remain silent.(goddam!)
where in a season that saw even ronald reagan
bow to the inevitable winds of change by signed
the king holiday into law, three house republican
arizonans, including an “unevolved” john mccain
& that doyen of true american conservativism,
senator barry goldwater voted unequivocally no!
state lawmakers like sand lemmings followed suit.
babbitt, not sinclair lewis’ vacuous protagonist,
but a governor doing the right thing, signed an
executive order declaring a paid king holiday.
but 7 months & 24 days later, soon-to-be-
impeached evan mecham rescinded that order
in one of his first acts as governor! (goddam!)
rising from a searingly dry tropical airmass,
pulled northward by low-pressure cells moving
eastward across the two-head's wilderness
echoing off the sulphur springs & the san simon
valleys came a venal & corruptible voice calling
out to arizonans with the arrogated authority of
i am that i am: “i guess king did a lot for the
colored people, but i don’t think he deserves a
national holiday.” but the rocks surely cried out
in protest & boycotts. all manner of stones,
pythagorean frozen music, released their song
with stevie wonder singing lead --hapy birthday
to yuh -- public enemy struck back, the nfl
relocated the super bowl & arizonans, kicking &
screaming, capitulated in ’92 (goddam!)
where even the wind that competes at dusk
to be heard with the yips, barks & howls of
coyotes in telltale yellow desert coats, weeps &
wails in uncertain english even tho’ placed for
a year in english immersion classes where
languages other than english were banned from
speech. brainfried arizonans insist that the
speech of the alligator juniper, the bitter condalia
& crucifixion thorn, the catclaw & even the skunk
bush had better be the same as that which arose in
england & southeastern scotland; that they
obsequiously subordinate their mother tongues,
their identity & culture, for to speak a language
other than english is nothing more than a social
defect.(goddam!)
behold arizonans, the behemoth that u have made,
rising out of the desert, so mean, & abrupt of
emotion – & so unlike that mighty torch-bearing
mother of exiles on a distant shore who verily
welcomed the poor & the homeless. this shire reeve
golem of single eye & foul disposition casts his
all-seeing search light glance to expose & extirpate
all illegals wherever they might be found, especially
in the ghostly golden gate barrio, in cuatro milpas,
or in any of the barrios historicas that housed the
brown laborers who built yr streets & towns, yr
canals, laid tracks for trolleys & trains that brought
in the droves of undocumented anglos who
overwhelmed the indigenous population! (goddam!)
what have u done, arizonans? the adam of yr labors
has run amok & points proudly back to the womb
from whence it came – that monster matrix of
racism, red-baiting,anti-government sentiment &
resentment of anything progressive, whose birth
juices reek of hatred & calumny – back to u & yr
guiltfear, yr paroxysmally parochial thinking. it has
engorged on a steady diet of rights violations, english-
only legislation, reasonable suspicion & belief, & now
it stalks like a grotesquery seeking to devour the
interdisciplinary study of racialized peoples, latinos
& chicanos in particular. what makes u think, brain-
fried arizonans, that it won’t turn on & devour u?