a mule of a different sort (6) 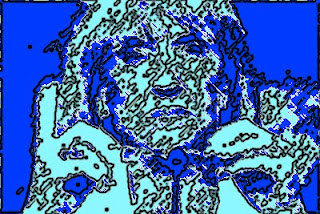 a different sort of mule

for hundreds of years whites have projected
the belief that …[non whites]…are inferior, a
concept that is in- consistent with reality.
what is the result? A mass psychosis has set
in among many white people.
ja a. jahannes

when inconsistency is prolonged
between belief system & reality,
psychosis ensues…

gov. jan brewer’s egotonicity, her
cognitive unraveling, the crudity of
her categorization & labeling –

of (in her mind) related & perceived
possible threats bears witness to this.
she has become like "il duce" a lens,

a nonadjustable fixed focus of sharp
images of white supremacy, creative
fictions to which her like-minded
constituencies cling; like the skeletal
steel-fingered grip of a corpse that
squeezes an object treasured in life;
that act like hallucinogens which alter
perception, thought & mood & are
dealt (her mouth to their ears) from

the very seat of state government. is
she not herself a courier, mind & soul
packing/stuffing the psychotics she

has swallowed & smuggled across the
rational borders of morality. is she not,
herself, a mule of a different sort ?
©Joseph McNair;2010

Posted by Joseph McNair at 1:08 AM