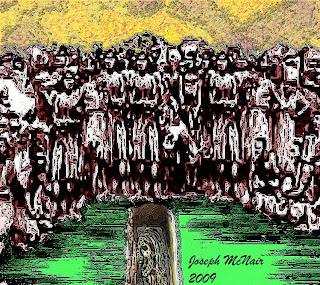 tryptych
1857
round de meadow am a ringing
de darkeys mournful song...
stephen foster
alas, dred scott, valued if intransigent
property of the widow emerson;
did you weep when massa john died?
did your lamentation ring the meadow
like a morning mist; & seep into the cold,
cold ground; into his deathsleep; into a psyche
so perverse that only in death might he debit
the imagined sorrow of his slaves for surcease.
well you know, dred, that crocodile
tears are tears just the same; you wore their
tracks like tribal marks when you sued
missus Irene for your freedom. had you
not parked your slavery at the
borders of Illinois and Wisconsin
living in freedom's cut for nearly nine years?
once free, always free your facile mind reasoned
trespass vi et armis!
u shook america to its core, dred;
u brought her to the brink of war!
but the crystal clear language of
amendments thirteen, fourteen & fifteen
was not yet writ;
& not yet writ was silent when
the court supreme asked:
can a negro, whose ancestors were
imported, sold as slaves,
be a member of the bodypolitic?
no! said justice roger b. taney;
no! chorused all but two justices
the negro is not a citizen;
merely personal property!
"once a slave, always a slave!" 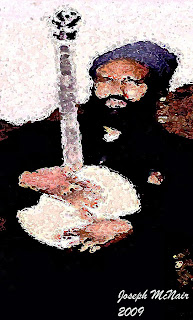 1865
i come from alabama wid my banjo on my knee
i'se gwine to louisiana, my true luv for to see...
stephen foster
civil war! & with one stroke of presidential pen
millions of africans are set free!
the war is over... & the huddled, breathing
african masses -- the wretched refuse of
warfare, capitalism & white supremacy --
they, too, dreamed of a beacon-hand,
a world wide welcome from lady liberty.
they, too, ached to embrace, to possess
a stately torch holding, tablet bearing,
crown wearing mother of exiles;
but the big apple was too distant, too
abstract for most of america's africans.
new orleans, though, was closer.
they came from alabama, from georgia,
the carolinas, & mississippi to the big easy.
they came bearing their banjos, bones,
tin whistles & fiddles from the south over
to ride the streetcars, go to public schools, vote,
even marry white folk.
in new orleans more than anywhere else
america's africans looked upon the face of freedom,
their suzannah, their lily of the valley,
their true love for to see...
yet freedom, however close she seemed, was
as remote, as abstract as the three hundred foot
concrete white woman wading the waters
of new york harbor. 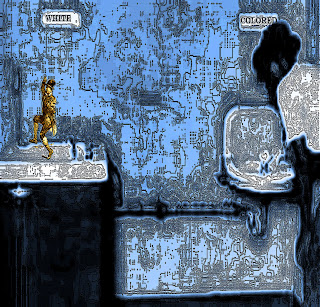 1877
weel a-bout & turn a-bout
& do just so.
every time i weel a-bout
i jump jim crow.
anonymous
jump jim crow!
see the terrified white men in black face
trying to be funny. see their crass
caricatures cavort on america's stages.
life, indeed, parodies art.
jump jim crow!
america niggardly revoked her promise.
gave the african a pittance, stole it
while he slept, then punished him
when he woke up for losing it !
jump jim crow!
write your bloody script; place your white
supremacist ward on the portals of toilets
resturants, theaters & polling places
to repel african spirits.
jump jim crow!
send your hooded spooks, your cowardly knights
to practice their murderous chivalry.
sow your grand dragons teeth
that you might keep america white & pure.
jump jim crow!
jump, jump, jump, jump, jim crow!
then jump some more! keep on jumpin'
'cause one day you gonna get tired!