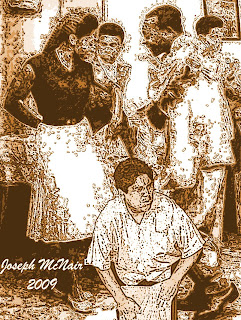 el dia del cajón
for kiki sanchez & the afro-peruvian project
the despairing african, spurned
by his gods, angolan, antillean or
otherwise, who pined away until
only the sound of his coughing
death remained to ride the currents
of time --a sound which lapped
& soaked the trunks of ancient
trees like a mighty swollen river;
became embedded in the resonant
woods which thru’ some efficient
cause became spanish shipping crates
or small dresser drawers awaiting
the passion-pounding of magical
hands to free them from their
utilitarian disguises; to become the
box-like cajón, whose dark rhythms,
the festejo, lando, socabon, pregon,
zamacueca, & alcatraz, seduced,
then caressed the whimsical charango,
mandolin-made from the tortoise or
armadillo shell & together invoked
the mermaids.