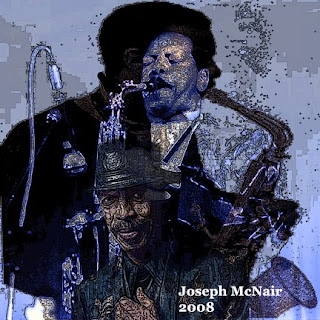 for ornette coleman
(1930)
“get out of town before we
finish u off ourselves…”
the baton rouge police
to a semi-conscious
ornette coleman, 1948
ornette, angular & engaged with the avant garde
wrote,played skeletal melodies all over inside/out
inverted changes fusing honky-tonk & bebop,
blues & the funkiest funk; created music free from
prevailing convention–harmolodics–leaping, bending
& honking layered solos, polytonal/polyrhythmic
travelogues, new music that mesmerized &
enthralled, confused & befuddled cognoscenti &
hipster alike. an unrelenting emblem of controversy.
u’ve been lauded by bernstein, schuller & john lewis,
while vilified by miles, mingus, & kenny dorham.
u’ve come a long way from ft worth, ornette!
from beat up in baton rouge to inducted into the
academy of arts & letters; from having yr tenor
thrown into the mighty mississippi to a genius award
there have been more highs & lows in yr life than in
yr solos. but when the controversy is no more, when
the honors & obloquies are forgotten,i will call up as
i often do from the permanent & limitless spaces of
my own music brain the 9 minutes & 41 seconds
of rapture, the elated bliss of the tune “once only”
waiting on the album, sound grammar, like a conch
shell on the beach to be put to the ear & listened
to… & nothing else will matter!