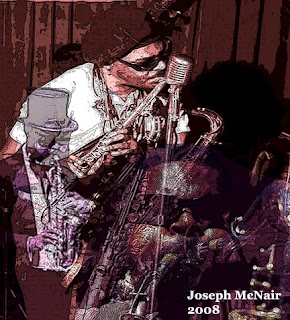 … is like seeing something that u
ain't ever seen in yr life & u
don't have to see it but u know
how it looks.
rahsaan roland kirk
marked & scored by summer’s lion, when mother
moon gifted nocturnal light from libra’s golden
scales to the bark scorpian in a raucus explorer’s
town at the confluence of the rivers scioto &
olentangy, ronald theodore kirk, a dreamer, was
born. called forth from a recurring dream, he
knew the delight of being & gloried in the delight
of becoming. was a multiplicity, awake & aware
in the inconscience of flesh; knowing that the
only thing in life that cannot be changed is the
day one comes to earth & the time one must
leave -–that everything else can be altered with
proper sacrifice. made ebbo at two, offering
his physical eyes that he might often look
without distortion into the bright moments of
the sacred -- his dream –- & remember the
universe’s birthing with sights & sounds; the
spectacular lightshow, the original primordial
creative sound heard in the musical name of
god; in the vital, transformational melodies
that shift & change the created & preserved;
& remember that he was there, making a sonic
bridge between dimensions,opening the way
for contact with higher realms & beings, the
same who urged him in his dream, to remember
who he is, to change his name first from ronald
to roland & later to rahsaan; who reminded him
that he himself set the numerical ratios that
determine concordant intervals of the scale;
fixed the primary intervals -- octave, fourth &
fifth –- out of which any musical scale,
composition or cosmos might be built, he
embodied a sense of at-tune-ment; was adept
at fitting together order & chaos, permitting
dissonance & consonance to embrace –-
creating harmony. he came ready & he came
to play --whether cornet, clarinet, sax or flute,
manzello, stritch,whistle or siren –- even a
waterhose –- the entire continuumof black
classical music, easily mixing & matching genres
w/ circular breathing, playing several horns at
once, betraying technique no improvising
saxophonist has ever possessed. he had the
hippest chops of them all, playing at the
end of his days one-handed better than most
could play with two. unlike charon who
placed conditionalities on the souls who
came to their one-more-river-to-cross,
rahsaan never extorted, never left any of
us to wander aimlessly on the beaches of
improvisation. for he was not a ferryman
to the dead or apathetic, but a journey agent
for those lively-up yrselves who yearned
for something more. he never failed to
take us from respective points of departure –-
however empty or desolate –- to the upper
limits of intensity; to points of ejaculatory
inevitability before exploding into heretofore
uncharted planes of rapture, musical euphoria,
making those of us who knew him & all of us
with ears & hearts who dug him …
eulipions

Posted by Joseph McNair at 6:25 PM