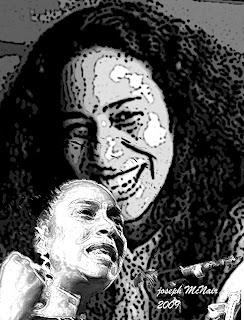 she who shonesang then... & now
for laureate devorah major
i know
i was one who pulsed
shone sang cajoled yelled,
cried and pled yes
yes i want a tongue
yes i want to breathe
yes i want to dance...
from "yes to life"

for some before u, the street poets & black
arts wordsmiths, poems were bullets, hard
projectiles to be cunningly propelled by mouth
& pen, to disrupt/disable by impact, penetration.
u have slung yr share of armament: stones,
bullets, & bombs exploding in unexpected places,
& with good reason. anger & rage, the didactic
& imperative voice, are often useful poet tools.
u have used them sparingly and to good effect.
but rather than bullets, yr poems are in the main
deliberate acts of love. sometimes u slip up, laureate,
& let something too personal, a truth about yr self,
slip out, like an aroused naked breast revealed
when a blouse falls open, or a blushing hint of the
honey oozing down yr thigh, but more often u lead
us down frequent side tracks & trails to clear
& still pools of what-is-not, where we may
refresh ourselves before returning to that narrow
winding path to what-is-so; or thru the backstreets
& alleyways, stepping respectfully over the dozing
icons & transients, past the ghostly buildings of
cherished black memories in an old, ailing city
dissolving into somewhere else; where only the
street signs are the same. yr poems keep us coming
& going, discovering & exploring the overlooked
familiar, the gaping holes left by the sadly missing,
the pervasive but understated faith-girded potency
of yr vision. u give us naught to negotiate with but
yr love, what u call “a homemade, pocket-sized acorn
tool of a solution” fashioned by u alone in some timeless
place at the center of things.

Posted by Joseph McNair at 3:46 PM