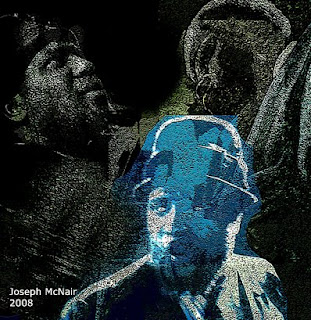 dizzy, he was screamin'
next to o.p. who was beamin';
monk was thumpin'

there was something about his hearing,
this one soon to be proclaimed hierophant
of bebop. heir to the stride masters, exemplar
of avante garde’s kinetic & tonal freedom.
he heard what others couldn’t; felt the energy
in a tune’s motion. self-taught, he led with his
ears, learned to play at nine & comped for a
faith-healing evangelist adding pentacostal
extensions to dominant chords,healing them,
raising them from the dead, lowering them into
involutionary substance,into special harmonic
tensions, hearing, then playing tones between
tones. drawing him near to others like himself –
two other thaumaturges specifically, bound
together by friendship & different glimpses of
a fractured vision, formed a triumvirate; he,
with bud powell & silvester st. elmo hope,played
together; stayed together for a time until stepping
forth from their listening/practice shaped, formed
by the experience – bud of the powerful attack,
the rippling triplets, deep octave chords & 16th
note runs, elmo with the probing, intricate
harmonies & sure technique,thelonious with wry
constructions & cascading runs bottoming into
witty discords.

there was something about his hearing. he took
in more than vibes transduced & translated by the
brain. took in that which came with those vibes –
the close fitting acoustical frequencies higher &
lower than fundamental,the subdued tonal colors
that thumped the tympanic membrane in codes &
cadences unheard/unfelt by others. monk was
thumpin’,rocked by an audition that split intervals,
semitones into quartertones in an experience of
“rightness” of far-out pitches sounded together–
something like the blues but emancipating the
dissonance, the sensation of beats & disturbances,
the percussive rhythmic displacements, the inter-
actions in the peripheries ‘tween partial tones
making him ready to meet & collaborate with bird
& diz, letting him hear even more than they, letting
him hear the wholeness of their respective visions
to provide the fills, to inject the sardonic humor,
to set in place the shifting structures & continually
changing asymmetrical forms of bebop – to ride with
them, self-realize; become a living enlightened
medium & emancipate the music of true & spiritual
freedom.