emmett till: the shaping of a people's dream (27) 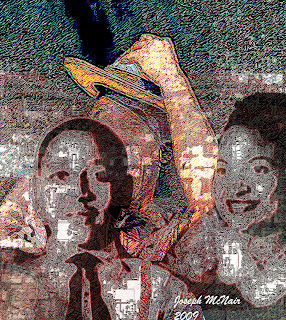 emmett till:
the shaping of a people’s dream

what do u think the negro mostly wants
from integration?

“nigras want nothing more, nothing less
than to marry & fornicate with white women!”

what he didn’t ask:

the membranous tissue of lies that partly or
completely occludes the rabbit hole to certain
sexual disintegration & mental sadism;
the plausible reasons given to explain away
purely phobic behavior driven by the prurient
delusions of mass psychosis. false sensate
perceptions elicited by what drug,
what wish or dark phantasmal desire?

the brutish african with his abnormally large
penis lasciviously leering at the fleshy
contours of whiteness; breaching, eroticizing
racial borders – mothers, sisters, daughters –
no matter; seeking to desecrate what was
proclaimed unsullied – the whited receptacle
for small but sacred fetishes.

see him, that mortal black behemoth, mount
the helpless rapunzel, climb her hair, take her
roughly, rending, tearing & stretching, his
sloshing pleasure drowning out her screams –

while a little white girl, bewildered by
unwanted sanctimony, ambivalently totters on
her pedestal, looks on not knowing what to do
or think. conflicted, she like shamhat of old
with the sweetness of temple harlotry. but religion
succors not her lust, only her guilt. she yearns for, is
repulsed by what she sees & aroused, makes
the vision obligatory for sexual functioning.

she plans furtive liaisons she can disavow if
caught; pawns beast & sexual intimacy for
virtue.

1941:
emmett louis till is born. no avatar of man-the-
whole is he; just a little black boy, raised
without a father, who in untimely death gave
conscious shape to a people’s dream.

a people’s unconscious, massed for
action, becomes aware of a light in
its collective darkness; a luminous
phosphorescence flitting, hovering
over swampy ground caused by
spontaneous combustion of hopes
unrealized & dreams deferred…

1955
emmett louis till, a pawn in a cosmic chess
match, a piece of the lowest value blunders
onto life’s eighth rank & is promoted to a
symbol of power.

three days in money was all it took. money,
mississippi. three days for the whimsical
innocent, traipsing along the crags of phobic
southern life, without regard for hidden peril,
to trespass racial borders, to stir the dragon of
sexual psychosis.

perhaps he got caught up in the glamour of
southern serendipity. thought he was in a
humphrey bogart movie. thought like a
fourteen year old. thought pretty carolyn
bryant was lauren bacall & that her conflicted
look meant:

emmett louis till, or maybe some other
faceless black phantasm, escaped missus
bryant’s psychotic subterranean chamber of
horrors & whistled. she gave him up to
redeem her virtue; to save husband roy & in-law
j.w. from the whirlpools that tear the
fabric of white southern mind & body.

three days later they came for him. before day
on a sunday, retributive white wrongness
snatched the boy out of mose wright’s house
& taught him a lethal lesson.

two redneck paladins of white womanhood;
killed a young buck because they could.

the mississippi delta, pristine symbol of soul
merging with the absolute, of spiritual
nourishment, tasted corruption; tasted the
desecration of adolescent whimsy

the good old boys had a good laugh when
they dragged the mutilated body out of the
tallahatchie. said:

“aint it just like a nigger to try to
swim the river wit a cotton gin fan
chained to his back.”

a bloated fourteen-year-old corpse not
worth a goddamned whistle.

"look what they’ve done to my son!"

put his reliquiae & american insanity on
immediate display for the world to see...

if a thousand, it was fifty thousand black
chicagoans on that grim september day who
looked upon that body; those remains:

a people’s unconscious, massed for
action, gravitates toward a gory
image, becomes identified with yet
another cruciate symbol; an
emblem of suffering & shame…

they marched around that coffin in robert’s
temple of god, some passing out from the
sight, their footfalls raising prescient echoes of
marches yet to come, some shouting as their
inner walls of fear & trepidation broke &
came a’tumbling down.

meanwhile, back in mississippi:

nine white farmers, two white carpenters &
one white insurance agent deigned not to
disturb their ancestors nor turn them in their
graves...

took minutes to acquit the accused in spite of
the sudden emanation of radiant courage from
moses wright who fingered them in open
court, or the damning testimony of willis reed
who forfeited his sanity when reaching asylum
in chicago.

bends the mind of an alabama seamstress who
got sick & tired of being sick & tired until she
becomes spirit in act;

floods the ego of a young georgia preacher who
identifies with a glory image of freedom
until he becomes spirit in act;

becomes fuel for an endless journey of
collective growth…

we give thanks, emmett, for yr immolation,
much like the faithful who, venerate agony,
transubstantiate flesh to bread & blood to
wine. we offer up yr body that our celebrant
collective memory may take, eat & remember!

we give thanks, emmett, for the gift u have
given us, first to move us up out of our apathy
& resignation into anger, then to help us
release that anger into self-affirming action.

we need to remember!

in remembering, we can revisit yr bloated
visage again & again, not to wallow in inertia
& recrimination, but to test our emotional
wounds to see if they are healing; to see if we
have outgrown our need to build collective
identity around past atrocity.

in remembering, we can, if we choose, give up
our grudges, resentments, hatreds & self-pity,
knowing that we do not need them to punish
those who have hurt us; knowing that we were
never truly victims.

in remembering, emmett, we can do honor to
yr sacrifice, drawing on its fullness & power
to rediscover strengths we’ve always had;
relocate our limitless capacity to understand &
accept others & ourselves.

in remembering, emmett, we can heal &
forgive.