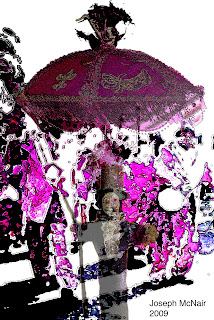 for wynton marsalis & his
new track “aint no!”
the people all saw the whirling maelstrom coming!
the steaming clouds affixed to howling winds spinning
like drunken dervishes, the many, one; evacuating its
watery bowels, rending concrete like sackcloth, ripping
up trees by the roots, peeling back roofs, punching
holes thru levees, knocking buildings flat, smashing
everything & its shadow – object, entity, mass,
phenomenon, dream,memory – all that stood bravely or
scurried fearfully in its wake; gouging great gruesome
wounds in the city’s psyche.

some – those who could – chose to run post-haste to
higher ground & safety; some – those who could –
thought they might defy the storm;hold on to hope, to
worldly goods & humble treasure. but most of these,
like others – who could not – the most bereft, the black
& blue, too derelict to make a way from no way were
condemned to ineluctable fate –to await a bigger, graver
disaster than the hurricane –the inept & negligent hand
of government to rescue, reclaim & deliver them into
an uncertain future or redeem their bloated, floating
dreams or corpses, the spoils of failed policy.

when nature’s wmd hit breton sound, drove a deadly
surge into lake pontchartrain ‘til her bowels burst
& water rose, breached the berm & spilled over onto
the wretched – the poor, the aged & infirm, the
abandoned pets, the lunatic party goers & 80% of the
city itself – they all had to learn to tread fetid water
filled with feces & contaminants, flavored by
decomposing cadavers – the detritus of the dispossessed.
too much tragedy for any mutual aid/benevolent or
social & pleasure society to gather & bury.

too many bodies to pile on an army of horse-drawn
carriages; to make their way through the narrow
cobblestone streets down to waterlogged graveyards,
to papa ghede. not nearly enough rum steeped in red
peppers; not nearly enough black goats & chickens,
or roasted bananas to still for a moment the cynical
laughter of the spirit of death. papa ghede has a joke
to tell:

“brownie,” his thin high nasal voice wafts
upon the wind. “u’re doing one heck of job!”

what’s funny? brownie is papa’s horse & does not
know it.

one of a very special breed of horses prepared to
bring the dead to papa, the power behind the magic
that kills. when papa mounts his horses they are
bereft of any sense of self, behave/speak compulsively,
& recover knowing nothing of what they did or said.
hear fema’s chertoff another one of papa’s steeds
attempt to imitate the sounds of thunder:

government officials did not expect both a powerful
hurricane & a breach of levees that would flood
the city of new orleans.

see him wearing those dark blindman’s glasses with
the right lens knocked out.

“ain’t no gov’ment lyin gonna’ get me down!”

but the most prized steed in papa’s stable is the one
who ventures forth in daylight without his black
undertaker’s coat, his black top hat; without the
cotton stuffed in his nose & ears; who in the public
eye can’t make constant use of dirty words or perform
lewd & obscene dances but can lie like an altar boy
while granting massive, long-term no bid contracts
to firms sleeping in his bed – haliburton, who for 10
billion turned our soldiers in baghdad into cannon
fodder or SCI who desecrated its own menorah
cemeteries, fed its jewish reliquiae to wild hogs &
paid 100 million to keep it quiet.

“ain’t no gov’ment lyin gon’ turn me round!”

there is room on the backs of these great white
horses to bear the dead; to bring them home to
papa, who in his own obscure comic irony has
formed the first line & taught the wind to sing
"near’o my god to thee” like tuba fats & his dirty
dozen brass band, in better days; dirge-like &
slow to accompany them. u can hear it faintly,
no louder than a whisper in algiers, the 9th ward,
canal & bourbon streets, but distinct as an efren
towns trumpet solo against the deathly quiet of
empty peopleless boulevards. there is great cause
for sorrow; there has been great wrong done.

but for every event that occurs, there will follow
another whose existence was caused by the first.
this is the great law. there will be a reckoning!

& there, too, will be much spirit treasure gleaned
for courage shown,pain endured & loss suffered.
for in truth even the rutted, well-worn cobblestone
path to the cemetery, to papa ghede is but a
throughway; an illusory doorway to the dark moist
pleasure of oneness, the awareness & the experience
of that, the real reward at the end of human sojourn.

so strike up the second line! the time for grieving is
past. we will juba dance our way back into the
big easy. we will bring back the drums & the call &
response.

we will shout like the wild tchoupitoulas. jazz & soul
will fill the streets like honey as the funky waters
subside & whatever gods we claim to serve will come
sweeping through the city with us & back on the
mainline. stop weeping mary & martha don’t u dare
moan. there will be neither exodus nor ethnic cleansing.
for the dead will raise up & prophesy:

when the dispossessed have gone back into the midst
of the city upon the dry ground; the greedy hand of the
company will draw back a nub & the last days
of ghede’s minions will be at hand...

Posted by Joseph McNair at 8:33 PM