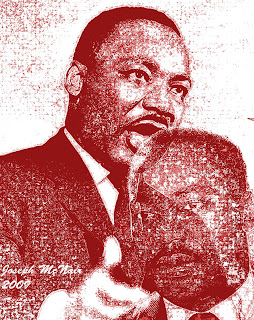 …his spirit must have nightly floated free
though still about his hands he felt his chains.
who heard great "jordan roll"? whose starward eye
saw that chariot "swing low"? & who was he
that breathed that comforting, melodic sigh,
"nobody knows de trouble i seed"?
james weldon johnson

no supernal presentation marked yr birth.
no special alignment of known planets. no
shield of david pressed upon a grand cross
no eight pointed star. no angelic hosts no
magi & none foretold yr coming. yet were u
born the first son & second child into a black
middle-class family of kings. the son of the
son of a preacher, three & twenty days past
the winter solstice, in the season of christ
& caesar, on 501 auburn avenue ne. atlanta.
no one knew then, michael, that u would
change yr name; assume a nom de guerre
for yr appointed social role: michael to
martin, the quintessential protesting cleric –
not against a corrupt universal church & the
purchased forgiveness of sin, but against
inertial forms of personal & social living
that resist acceleration & change; against
the forms of overt & institutional racism
that seek indulgences; the remission of
punishment. no one knew then, michael,
that u would be the focus,the coxswain,
the shepherd of the transforming & creative
response of spirit to a disparate &
disintegrated people; rootless, aroused &
demanding africans wandering in the
wilderness of america’s intellectual
generalizations, formulas & standardizing
regulations – suffering in the midst of
plenty. no one knew that u would utter a
new logos, a new word of power to project
on all unintegrated americans; unleash the
power of a dream.
neither did u, martin, perforce the more-
house college maxim: to uplift the human
race through responsible citizenship; was
naught but a subliminal goad when u tarried
there. nor did crozer & a divinity degree
bring sudden disclosure of the meaning of
yr destiny. no, non-disclosing spirit piqued
the course of yr life’s events. that same
spirit gave resonance to yr message;
made it the answer to the needs of the
millions unable to accept, to endure
american social living.
it focused & projected a new kind of
humanity, a new kind of personhood; it
activated new human faculties. but it
revealed itself to u, first, when the
stubborn courage of an alabama seamstress,
too tired to give up her seat for oppression –
whose wholeness unmasked in an instant of
resistance her essential identity – induced
in u a charge u were compelled to keep;
raised yr vibratory rate, made u shine
with an inner light – the light that alone
integrates the chaos of the world. the rest,
as they say, is vulgate history. that light,
though, was the substance of yr message
& yr dream. we clamored for freedom, but
u dancing, like a drum major at the head
of the parade, like a will–o’–the–wisp,
showed us that freedom isn’t free; that it
is dearly bought & paid for in the often bloody
coin of personal integrity & responsibility.
yr message & yr dream was about being
free & whole; about discovering one’s true
identity; about refusing to be turned around
or away, steadfastly adhering to life, love
& freedom as interchangeable elements of
righteousness. spirit has acted, martin, in
& through yr life. has impregnated yr dream;
bestowed its most wondrous gift to a confused
& oppressed humanity – that divine spark
which arouses, animates & sustains; the
honey'd taste of freedom!

Posted by Joseph McNair at 4:58 PM