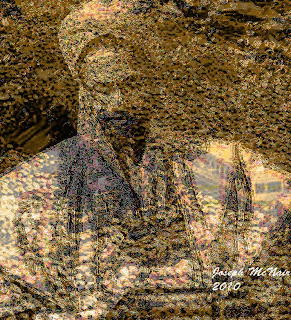 farewell hakim
for hakim ali muhammad
aka steven marshall
farewell our son, our brother, our father & friend.
take our poignant wish for yr welfare at parting;
a parting of flesh and spirit, a cleaving it seems
of one from the many.

but we know that this is not true; u cannot be
separated from us. our shared experiences alone
have tangled our lives in knots that can never
be untied.

u the impish trickster, the linguist, scientist & sage,
the first among us to dabble; to pierce the unknown.
like lemmings, some of us followed you to edge –
the cutting edge – to walk barefoot, in single file &

always behind along occam’s razor; leaving it to u
to find the simplest theory to fit the facts of our lives.
& when in time we found our own way, thinking &
growing for ourselves, u would always reappear

to open a new doorway; to point us down new roads,
at different vistas or backwards into the past. & now,
u lead us once again, into the cosmic soup where
souls & stars are made; into allah’s peace.

farewell hakim, & stay in touch! It is not too
much to ask. for years & with hundreds, even
thousands of miles between us we were but a phone
call away, & though we used our telephones

sparingly, sometimes grudgingly, our connection,
more than wires or underground cables, more than
light racing signals relayed by satellites, was inside;
more interior than cells, or molecules, or sub-atomic

particles, indelibly etched not on microchips or
silicon but on the quanta of intelligent space. we can
still call; still connect on a line as clear as prayer.
until then, hakim, until such time as our separate

realities converge and u reappear again, dreaded
or clean-shaven, speaking in tongues or playing your
guitar, trumpet & harp, bringing us up-to-date or until
we regain our places next to you in starry networks,

until then, hakim, allah kiyyaye!!