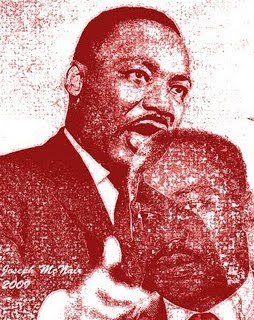 It is for us to finish his work

1. Come together to identify and address structural racism and structural inequality as the key civil rights challenge for the 21st century.

2. We can organize our productive conversations around the premise that

a. opportunities exist in a complex web of inter-dependent factors, and that to alleviate inequities in any single area, we must first consider the entire structure that supports these inequities.

b. everyone should have fair access to the critical opportunity structures needed to succeed in life; and that affirmatively connecting people to opportunity creates positive, transformative change in communities.

3. We can infuse our respective disciplines with content that brings to the surface the geographic and ideographic footprints of inequality. Social justice issues are never static and new challenges and issues are constantly emerging.

Martin Luther King did not live long enough to see his beloved nation rise up and live out the true meaning of its creed. He did not live long enough to see the sons and daughters of slaves and slave master sit together comfortably and by choice around the table of brotherhood. Nor did he live to see the pockets of injustice and oppression, whether in Mississippi or wherever they festered in this country, transformed into places of freedom and justice. He did not even live long enough to see his four children grow up.
It is for us to finish his work. Can we do it? Are we up to it? Cynics might say that it will never happen. Who could expect such from the powerful historical exploiters, the villains or the ne’er-do-wells. Who could expect such from the oppressed, dispossessed and disenfranchised. I take courage from poet Countee Cullen pondering the mysterious movements of God:
I doubt not God is good, well-meaning, kind
And did He stoop to quibble could tell why
The little buried mole continues blind,
Why flesh that mirrors Him must some day die,
Make plain the reason tortured Tantalus
Is baited by the fickle fruit, declare
If merely brute caprice dooms Sisyphus
To struggle up a never-ending stair.
Inscrutable His ways are, and immune
To catechism by a mind too strewn
With petty cares to slightly understand
What awful brain compels His awful hand.
Yet do I marvel at this curious thing:
To make a poet black, and bid him sing!

And James Weldon Johnson who extols in two stanzas the achievements of a people brought so low:

O black and unknown bards of long ago,
How came your lips to touch the sacred fire?
How, in your darkness, did you come to know
The power and beauty of the minstrel's lyre?
Who first from midst his bonds lifted his eyes?
Who first from out the still watch, lone and long,
Feeling the ancient faith of prophets rise
Within his dark-kept soul, burst into song?

Heart of what slave poured out such melody
As "Steal away to Jesus"? On its strains
His spirit must have nightly floated free,
Though still about his hands he felt his chains.
Who heard great "Jordan roll"? Whose starward eye
Saw chariot "swing low"? And who was he
That breathed that comforting, melodic sigh,
"Nobody knows de trouble I see"?