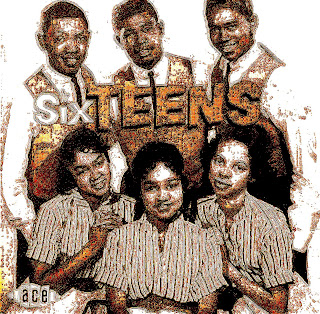 a casual look
for trudy wells & the six teens
lyrics from “a casual look” by
ed wells (1956)
in an age of innocence where happily ever after
began with an idyllic wedding walk down the aisle
just days before a conscripted groom shipped out
overseas, i raptly listened, my eyes bulging with pulsing
heart-shaped pupils, to trudy wells, barely a teen
herself, as she fronted five other teens to sing:

a casual look, a little ring, can reveal just what u think…

trudy’s girlish voice fleshed out my simple love;
painted the self-coherent, internally consistent setting
along with all those do-do-do-do-do-do-do-dos, for my
acting out hormones to play at love. i could be her
unshy soldier guy with the frozen face; i could
practice what would become a lifetime of begging:

darling can’t u see that i’m going overseas
for two, three, four years, don’t know how long its
gonna be …

my romantic fantasy lay hidden in that voice; leaked
out into my real world through that simple lyric,
opened up the timeless for me to step into & stay
there. but my real affairs & numerous nuptials,
which began sweet & innocent enough, more often
than not ended in trouble, heartaches & pain.

& just to think all it took
was a casual look…

there were no songs to tell me that openings were temp-
orary, that fantasy could neither balance love & need nor
even hint of the impossible selfwork involved in making
a relationship last. like a man trying to relive his first
coital release, i’ve spent the goodly part of my life trying
to reprise the thousand delights cloaked in a casual look.

Posted by Joseph McNair at 3:22 PM