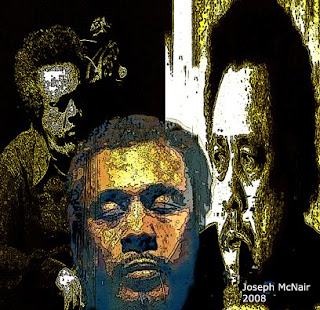 of monks & armor-clad conquistadors
sniffing out cibola & her seven golden
cities, leaving in their wake a fragrance
suggestive of mold, a cloying sepulchral
smell of crumbling mission adobe; the
effluvia of ignatius of loyola & dominic
of france.

obscuring the army camp overlaid
on an inhospitable desert; telescoping
the rest of his mother’s life to a few short
months & foretelling the angry self-parodic,
incandescent, hypersexual persona –
foretelling the scintillating music that
was to come.

for it was all about the music & the music prepared the
vessel, set the stage, set the life apart for its special use &
purpose – made it holy– not the flagellating spirit numbing
holiness of plain, down home half-indian mamie carson,

who flew into the breach left by his mother; who set up
housekeeping & didn’t ‘low no devil music in her house;
who sought to stop his ears against

but a holiness derived from music that was life itself; that
justified & claimed him for its own; that invested in him
sanctity,in musical act as well as in habit & he in turn
claimed it as his beginning & the end towards which he
daily, unflinchingly, reached.

reaching for the classical strains of stravinsky & later the
cacophonic harmonies of schoenburg; stealing forbidden
radio sound bytes of ellington & immersing in the baptismal
waters of

rapturous pentacostal prosody, in the sacred
sexual undertones of a sanctified stride left hand
drawing him near’o his god – in coitus & cloture–
the god of butt-shaking christian possession boiling
like old cabernet in a cauldron, reduced to thick
syrupy compositions strained through the
coarse sieve of his genius.

& mingus increased touching the likes of satchmo, hamp,
norvo, taking much from them, leaving them with much
more. getting hired & fired by the duke, flying high with
bird, diz, bud & max, bickering with miles until conflating
his own disparate ideas,

the accretion of genuine genius onto the surface of
jazz, exposing bebop as a transient cul de sac. the
growth of a massive talent that gravitationally
attracted more talent; sucked it into a close binary
of genius & madness where ideas proliferated, were
violently nurtured & drawn out; where mania ruled the
bandstand, kept time & trailblazed, tightening the

underlying beat to allow rhythmic flexibility up top, filling the
void between improvisation & orchestration, stirring up
turbulent fervency, taking it up to ever higher emotional levels
of peak experience & nobullshit soul-baring.

the music filled his soul, his very cells, but could only feign to
replace the progressive loss of nerve cells in the brain & spine
that soon confined him to a wheelchair

unable to write his music down or compose at the
keyboards, he sang his last music into a tape recorder.
neither als, perversity nor being black in America could
keep him from composing over the blues one last time
his faint failing voice issuing forth a feathery adumbration
of his lifesong, only hinting at the strength, beauty &
glory of his great soul.

& then he left us – had the grace to slip away under a waning
crescent moon in june in cuernavaca but not before arranging
to have his ashes spread upon the ganges, passing into back
ground noise like "the music midnight makes."