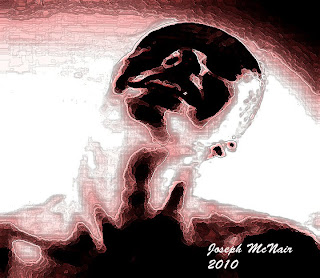 
" ...you're so kind & careful not to go to her too soon
& she takes your voice & leaves you howling at the moon."
bob dylan

it took just one time, just one penetration
& he was hooked; his mind gave him permission
to think about her as much as he wanted;
to go to any lengths to make it happen
again, to feel good again, to feel the sweet
tension in his muscles, in the skin pulled tight
around arteries opened wide enough to
let blood surge, to squeeze veins shut & trap the
blood inside his hugely swollen need to slide
piston-like thru the grip of lubricious walls,
beyond the point of no return…& explode

Posted by Joseph McNair at 9:07 AM